Robotmaster V7 Exploits the Full Capabilities of Any Robotic Cell


Manufacturers and job shops with high-mix, low-volume production often struggle to justify the time and expertise required to program robotic cells. Until now, harnessing the boundless flexibility of robots was the exclusive domain of large companies with deep pockets. No more.

Robotmaster’s new software platform forever alters that paradigm. A radical architecture harnesses robot flexibility to exploit the full capabilities of any robotic cell. No matter how simple or complex, from a straightforward seam weld to a multi-robot trimming and deburring cell, error-free task-based programming is just a click away. It’s software so advanced, anyone can use it. 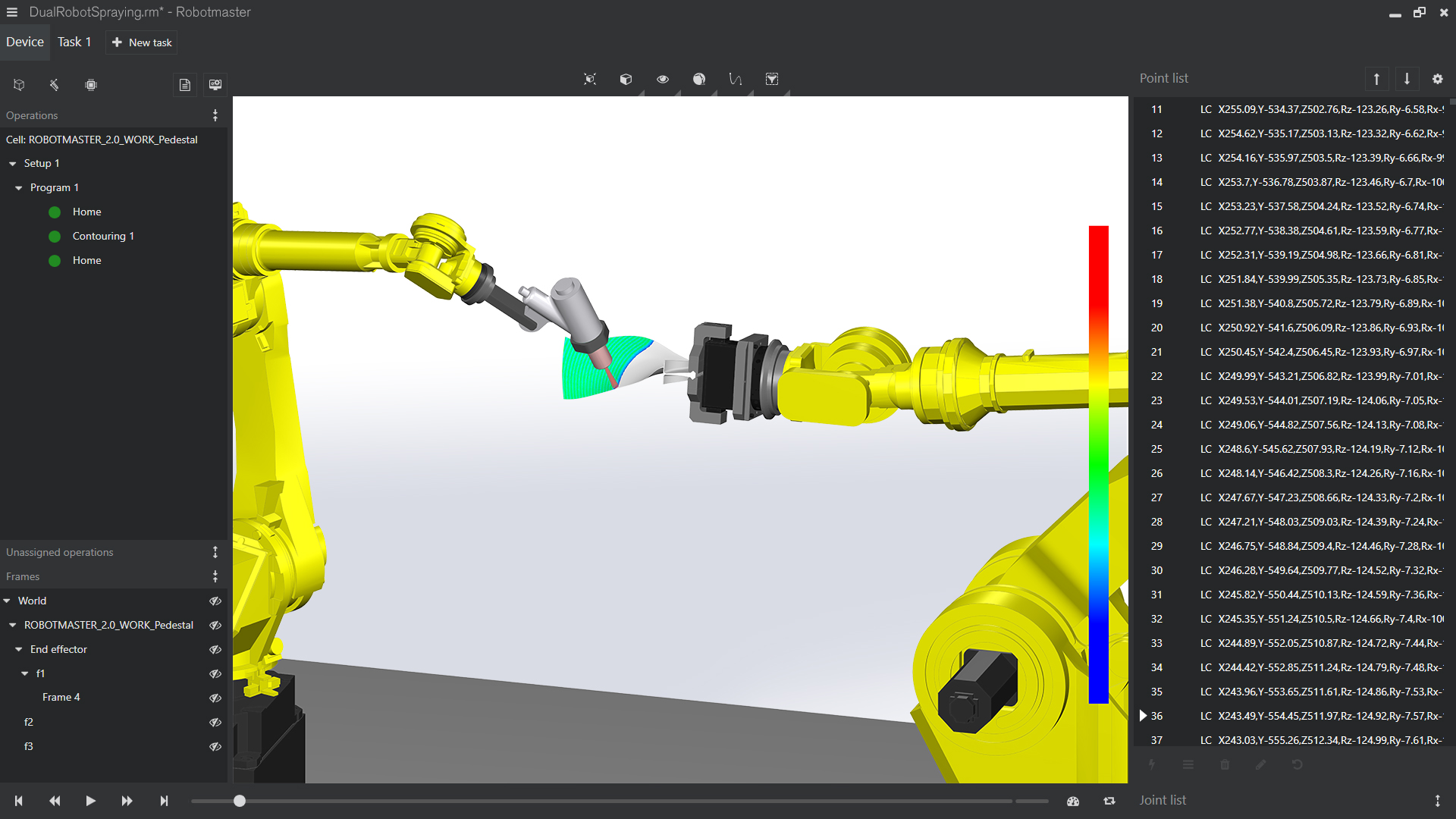 With Robotmaster V7 software, CAD/CAM proficiency and robotics expertise is no longer a prerequisite. Tedious point-by-point programming is in the past.

“Exploiting the full capabilities of any robotic cell is the single, most significant technological advancement we’ve made with Robotmaster V7,” says Garen Cakmak, Senior Director at Hypertherm Robotic Software, makers of Robotmaster offline programming software. “Its full potential has yet to be revealed when we fully exploit the new architecture and create features on top of the core.”

In the meantime, industry is in awe of the software’s possibilities. Automatica 2018 showgoers were stunned by its ease of use and revolutionary capabilities. Criteria-based optimization, automated task scheduling, and collision management features provide users with unmatched flexibility and configurability.

When programming two robots, some systems integrators will confess to missing the cycle time goal by a few seconds. Typically, they add a third robot to compensate. If they were able to optimize the robot movements to achieve the cycle time with two robots, this would be ideal. But until now, no supplier offered the right tools to accomplish that level of optimization.

“Our software shows you opportunities for optimized movements that most users wouldn’t even realize exist,” says Cakmak. “Users will usually waste time on trial and error, eventually give up, and make a costly hardware change to get the job done. With the proper software tools, you’re able to see where the issues lie. Even if there’s a small band of opportunity, you’re able to find it.”

Any Number of Anything

The developers set out to accomplish what no other offline robot programming software had done before, to support “any number of anything.” Robotmaster V7 supports any number of robots, tooling, configurations, tasks and processes. 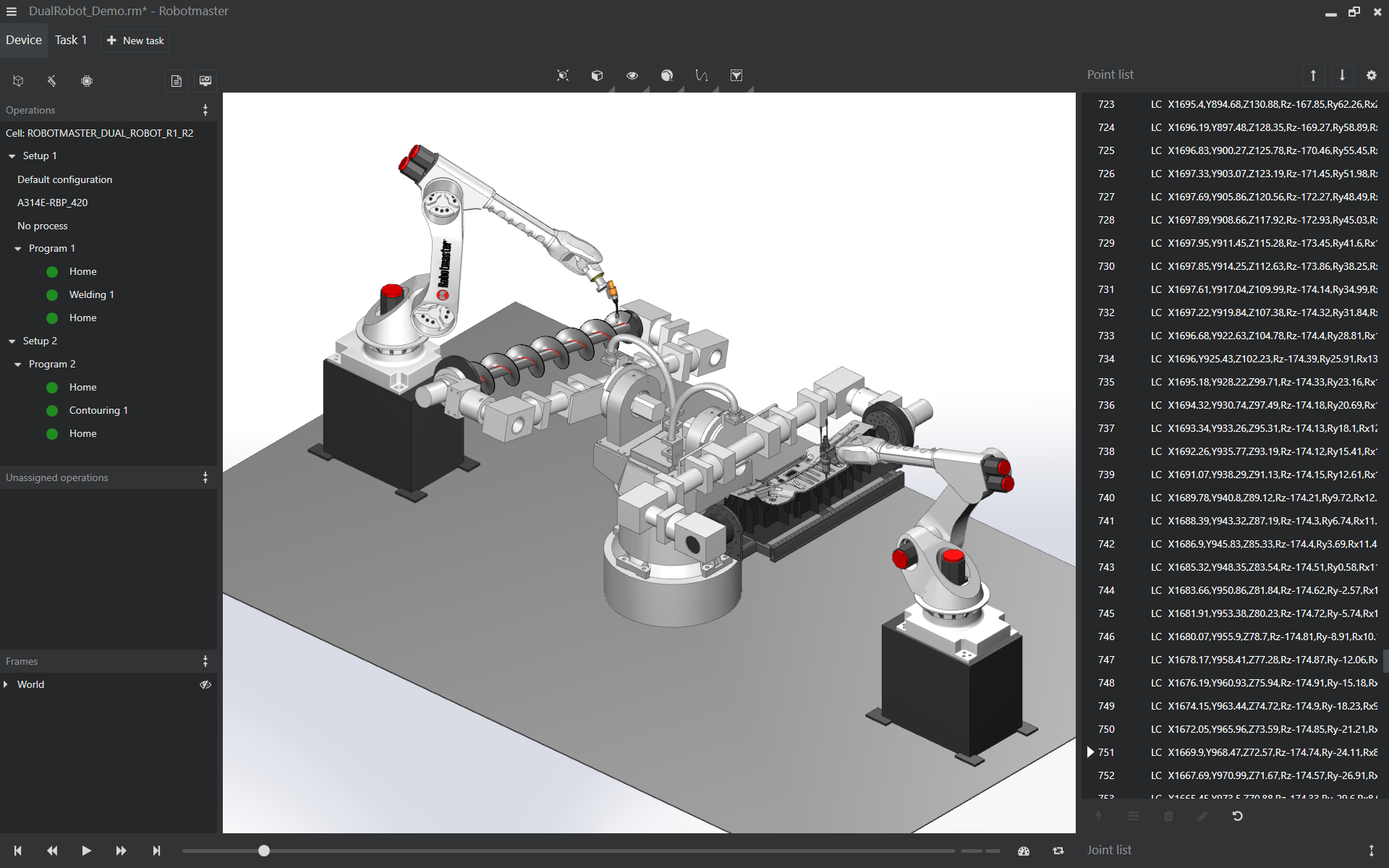 For every programmed point, a typical six-axis robot has eight possible configurations. Multiply that by the number of robots in a cell and the possibilities are virtually limitless. Robotmaster V7 software harnesses all of that flexibility, whether you have one or more robots, so you can exploit the full capabilities of any robotic cell.

The Robotmaster V7 automated path planning feature displays the different channels of success and proposes different types of paths. It also ranks different robot paths against specific criteria as chosen by the user.

Criteria-based optimization allows users to not only avoid errors, but they can choose their level of risk as it relates to, for example, cycle time. Users can also choose to minimize motion on a specific joint. In turn, the software will map a path according to the criteria set. Smart processing quickly recalculates, verifies and optimizes the task as changes are made.

The new software architecture is so advanced, many sophisticated features have yet to be fully realized.

Future versions of Robotmaster V7 software will include an automated task scheduler. This feature will enable users to properly sequence robot movements in a multi-robot cell. The user can then rank different criteria based on what they are trying to accomplish.

For example, you might want to rank error-free, cycle time and quality. You may be willing to sacrifice speed for a given time as long as the robots are more rigid. The software shows all the capabilities of the cell and then ranks each scenario according to users preferred importance level. Users can choose whichever scenario they prefer from a ranked order of scenarios for each robot in the cell.

The software performs all the tedious computations, which previously had to be done manually. Only the choice is left to the user. With a few clicks, path programming is optimized from the user’s perspective.

The new software architecture will also support an automated collision management feature. Collisions between robots are a major challenge with multi-robot cells. Robotmaster V7 has a highly interactive, graphical interface that will allow you to designate collision-free zones on screen.

As you move zones around, it will influence other zones and automatically synchronize with the automated task scheduler. For example, you can have one robot wait while another robot completes its task. As you evaluate different scenarios, the software will manage collisions in each zone. The intuitive interface will allow the user to preview in a simulated environment how each move will impact the outcome, optimizing complex scenarios while avoiding collisions.

Avoiding collisions with parts and tooling is just as important in cells with one robot. Robotmaster’s intuitive simulation and optimization tools generate error-free robot paths in any scenario.

Too often in the quest to make software more robust and capable of managing complex scenarios, easy processes become unnecessarily complex. For cells with one robot performing a specific task, it was important to maintain the ease of use for these scenarios.

“A cell with three robots has a lot of flexibility. There’s a lot of potential and a lot of power that can be harnessed, but you’re at the mercy of the tools you have,” says Cakmak. “Our goal was to keep the simpler processes just as easy and make the complex realizable with maximum flexibility.”

Just released, Robotmaster V7.0 software delivers error-free task-based programming for a single six-axis robot with the option of external axes. Future software versions will automate the programming of complex multi-robot cells and seven-axis robots. Advanced features such as criteria-based optimization and automated task scheduling will unlock the full capabilities of any robotic cell. Harnessing the true flexibility of robots is now anyone’s domain.