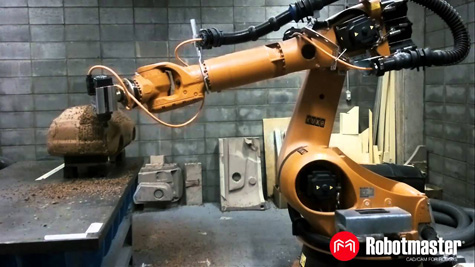 Imagine a sculptural replication for a new car model prototype or technical component for the automotive industry. This process can entail months of manual building and modification and be rather painstaking. Presently, a high-tech solution exists and is rapidly gaining widespread acceptance as a major breakthrough for automotive car modeling with emphasis on using robots and automatic programming. Carried out through a regular process for automotive prototype production, a model starts off in 3D design software where it is then passed to a sculptor to model the clay in the form of a car. Instead, the clay prototype is machined using robots. The robotic software allows for simulation, validation and optimization to robotic motion by turning a virtual car model into reality.

Robotmaster is a leading Canadian developer of CAD/CAM based robot programming, optimization and simulation. According to Carlos Marcovici, Robotmaster Distributor for Brazil, “With a 3D model, the robot trajectory is optimized to produce a precise and error-free robot program.”

Marcovici goes on to state that, “Because this is programming and simulation software, it graphically displays robotic errors such as: joint limits, singularities, out of reach and collisions. The programming software is developed to work with each robot manufacturer’s code to generate optimized robot motion.”

One of the key features of Robotmaster is that a robot trajectory is created directly off the 3D geometry. “With Robotmaster, you get optimized error-free robot programs”, explains Marcovici.

A proven solution within the aerospace, transport, and high technology industries to name a few, Robotmaster is also well poised within the automotive sector. Featured on Brazilian television, a story showcased a miniature version of the statue of Christ being milled using Robotmaster software, after being 3D scanned by a drone. Marcovici is quick to illustrate that Robotmaster can also be used for 3D printing of miniature sculptures.

Furthermore, Marcovici goes on to state that, “This software is ideally suited to program robots for such tasks as material removal in milling, deburring, drilling, laser cutting, and plasma cutting on top of additive manufacturing such as laser cladding, welding, and non-contact inspection.” Common robot programming challenges typically include intricate user intervention or costly manual editing. “By optimizing robot programs, users can see a significant increase in productivity while generating more profit with their robot, using robots for short production runs, and delivering closest conformance to design”, mentions Marcovici.

Milling a car model from clay

Based in São Paulo, RobotM-Br is the exclusive distributor for all Robotmaster software distribution and implementation for Brazil. With 25+ years of experience, RobotM-Br is strategically positioned to serve the robotic software market by offering an innovative approach to robot manufacturers and integrators.