Weber Aircraft LP, a subsidiary of The Zodiac Group of France, is one of the leading manufacturers of commercial aircraft seats for airlines and major aircraft manufacturers worldwide. The Company manufactures a wide variety of commercial aircraft seats, ranging from ultra-luxurious first-class "lie-flat" seating systems to innovative, space-efficient coach class seats with patented design features and has produced more than 800,000 passenger seats for all types of aircraft. Weber recently opened its new multi-million dollar, 160,000 square-foot seat manufacturing facility, bringing the Weber campus in Gainesville, Texas, to more than 500,000 sq. ft. in total.

In recent years, aircraft component and system suppliers have faced tremendous downward pressure on price. Weber set objectives to drastically reduce costs while maintaining their excellent and hard-earned reputation for product quality and customer satisfaction. For the new facility, they were seeking the most effective, flexible and efficient solutions, consistent with their lean manufacturing philosophy.

One immediate problem facing Weber was the need for increased production capacity for plastic food trays for commercial aircraft seats. The existing 5-axis routing machine was running at its full capacity. Buying a second identical machine was not an attractive solution - it was oversized and overpriced for their application. After a fruitless search for an off-the-shelf routing machine better suited to the particularities of their product and solicited the help of the Texas Manufacturing Assistance Center (TMAC) and the Automation undefinedResearch Institute (ARRI), at the University of Texas at Arlington, for guidance on finding the right manufacturing solution. 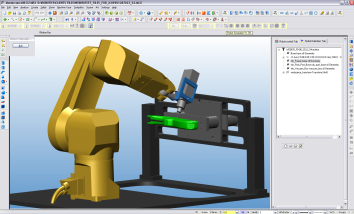 ARRI began looking at alternate, novel methods for routing the trays and suggested a robotic-based routing cell as a promising approach. Weber was open to the idea but required that the proposed solution be able to convert CAD data directly into a robot-ready program file, so that the new work cell could be seamlessly integrated into the existing manufacturing engineering processes accustomed to programming CNC machine tools. They were concerned that robot programming was typically performed on-line, a manual process that consumed valuable production time, which could undermine their cost-reduction objectives.

ARRI selected a Staubli Rx90 robot for the high level of accuracy that is inherent in Staubli's motion control, a necessity for the trimming application. They brought in Robotmaster to solve the programming issue. No other software that ARRI had evaluated could meet the criteria of: 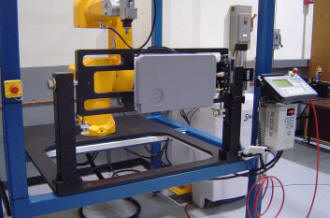 Staubli Robotics Manager, Mike Ouren,commented: "This is fantastic! Over the past couple of years, it seems more and more clients that are familiar with machine tools are becoming aware of and showing interest in the low cost and high flexibility/speed of 6 DOF manipulators for certain applications that currently use large machine tools; especially with trimming, machining and de-burring of soft materials. Offline seems to be the future of many process applications. Robotmaster provides us with an excellent tool to which we can refer customers that need this type of interface."

Within five months, ARRI designed and delivered a fully operational robotic routing cell to the Weber Aircraft facility. Robotmaster provided Weber with the ability to:

According to Raul Fernandez, Program Manager at ARRI, "The trimming paths generated by Robotmaster were good basically on the first try - congratulations !". The performance of the new system surpassed the existing traditional routing machine in terms of cycle time, cutting quality, footprint, and operating costs.

The robotic routing cell, supported by Robotmaster's CAD/CAM for robots, quickly proved itself in Weber's operations:

Weber programmed hundreds of parts to the cell, generating off-line code, loading it to the robot and running the parts without any editing or additional intervention. A second robot work cell and additional seats of Robotmaster were added to leverage the benefits across their product line. "The robotic routing system has really streamlined the process. In every instance, it has exceeded our expectations", says Jeff Robinson, Weber's Manager of Engineering Services. At the official opening of the new seat manufacturing facility, Weber Aircraft's president, Michel Labarre, remarked: "This factory is our showcase, and it is a competitive weapon. We will put it to good use for our customers, for our employees, for our community and for our shareholders."