One of the strengths of offline programming (OLP) software is that it combines two powerful capabilities: simulation and programming. These two capabilities fit together like two perfect puzzle pieces when it comes to effectively programming robots offline.

OLP software enables the user to program the robot on a computer, independently of the hardware, rather than taking the robot away from production which is the case when programming using the teach pendant method. By importing a CAD model of the part, the software can automatically generate the path trajectories and create the program in a matter of minutes.

By overlaying these two environments together, powerful programming capabilities are further enhanced as the user can see the result of the program and is able to visually validate that the program is free of robotic errors such as collisions, joint or reach limits, or singularities, configurations that restrict the movement of the robotic arm. 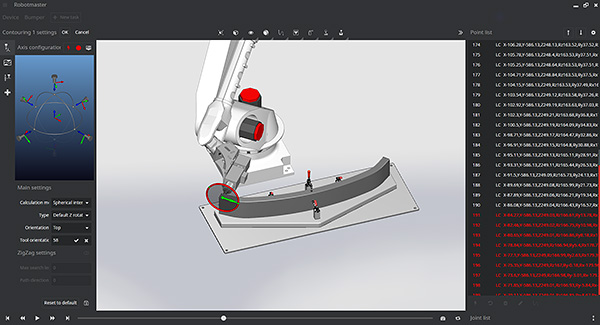 This powerful visualization allows the user to easily make adjustments to the process settings until the desired results are achieved. Powerful offline programming software will guide the user with visual cues to eliminate any robotic errors in the program.

A programming software without the simulation capabilities, would require the user to be a robot code expert to successfully create a program. This would make the process of validating a program prior to running it in the real world very challenging and time consuming. Each robot brand uses a different programming language requiring the user to be very fluent in each of these languages to proficiently write and edit robot code.

Simulation is a powerful tool that complements the programming engine within OLP. Powerful OLP software, such as Robotmaster, takes this a step further. Using a reverse kinematics engine simulator, users can not only see the simulation of their program but can speed up, rewind, or fast forward through the program. To the non-software developers reading this – I urge you to consider all the calculations and processing that is happening in the background. What is demonstrated within the OLP software is not just an animation of the program, but rather a visualization created by gathering data available from the cell components, tooling, process parameters, robot limitations, and part geometry.

When the simulation is sped up, so are the programming calculations. It’s important to note that not all OLP software can handle these rapid calculations speeds. Most software requires the simulation to be played from start to end at one speed, however this flexibility saves time when reviewing long programs or allowing the user to fast forward through a program to the section where adjustments are being made. At the end of the day, the goal of offline programming software is to reduce programming time so the faster the validation process, the faster the program will be complete and ready for production.

The ability to validate, verify, or simulate the process prior to performing it in the real world is vital to ensuring the program will yield the desired results, without any collisions or program errors.

This perfect pair is a great tool for those who want to program robots without being robotics or coding experts. However, it is also a valuable tool for those who design robotic systems. Using an OLP software, they can program the task on the part and then bring that program into the simulation environment to see what cell layouts and components are needed for the robot to perform the task as programmed. An integrator can easily make adjustments to the program or cell design and visualize if it will work. For this reason, robot integrators use it as a design, validation, and sales tool. Programmers can quickly evaluate cell configurations, detect potential collisions, and perform reach studies, so they discover issues early in the design and automation process.

The best offline programming software marries programming and simulation seamlessly. By generating a program and simulating the process within the same platform, program optimization is done automatically rather than through trial and error, which saves money and resources.

Learn more about OLP software or chat with our team of experts to determine if offline programming software is the right solution for you.

About Robotmaster
Robotmaster® offline programming software for robots helps manufacturers maximize their productivity and profitability with an intuitive and powerful programing solution ideal for production runs of all sizes and varying part complexity as a result of integrated CAD/CAM functionality.